A Weekend of Firsts

This past weekend marked the firsts for many in our family. It was the Huntsville Half Marathon and 5K run. This was Craig's first half marathon and he did well. He finished in 2:00:33. Though he was wanting a faster time, he did a great job! Craig's parents came out to cheer him on, as did the kids and I. 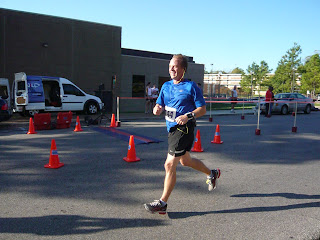 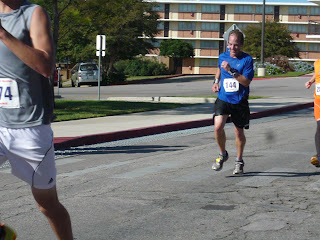 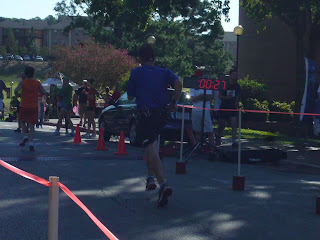 It was also my first. My first 5K and actually my first competitive run. I was pretty nervous the day of the race but it was a lot of fun. The hills were hard, but running in our community helps, as we have many hills too. I finished 2nd in my age group with a time of 30:11. 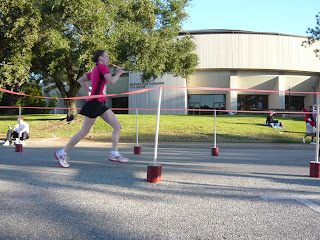 We received cool tech shirts and we both got a medal. Craig got a finisher's medal and I got a second place medal. 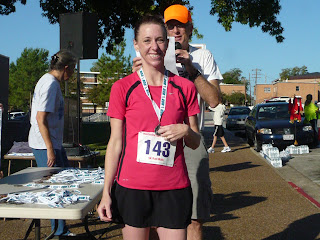 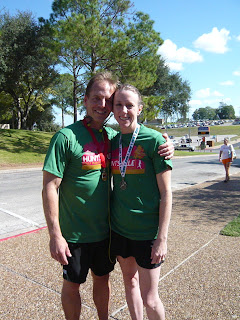 What also made it fun was the fact that some of our friends participated too! 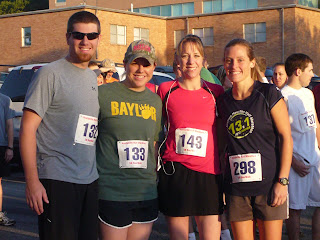 Craig's dad even had fun clowning around, pretending he had raced and won! 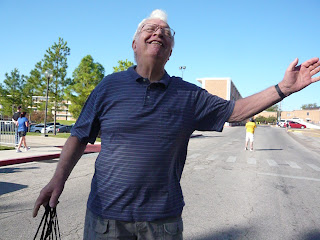 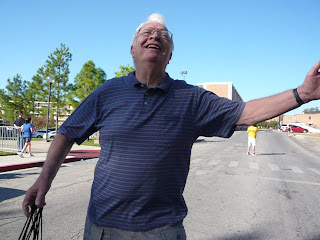 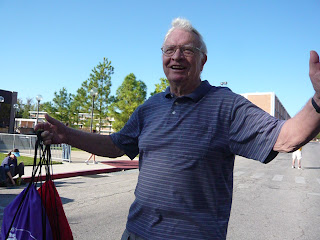 The second part of the weekend and the most important first, was Lydia putting God first in her life. Lydia got baptized! She was just beaming! Usually the family stands to support the person getting baptized, but because so many people have nurtured Lydia along the way in our church, Craig asked all those who supported her to stand. She thought "Whoa!" when she saw everyone stand! It was great to have Craig's parents, his brother's family and my parents celebrating with us. 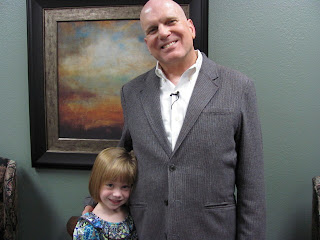 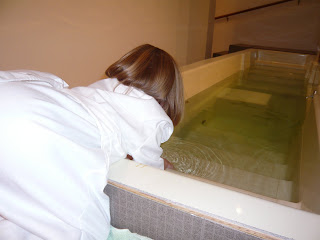 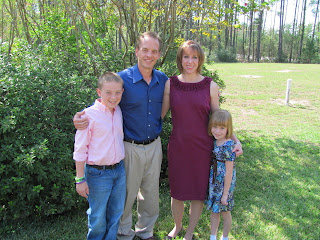 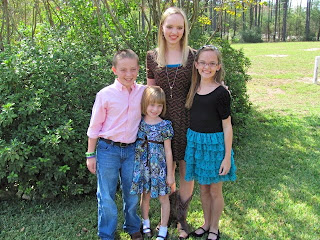 What a wonderful weekend of firsts!!!
Posted by The Henderson's No comments: Links to this post

I'm trying to spice up our blog. I hope you like the changes.
Posted by The Henderson's No comments: Links to this post

This past weekend Calvin and Craig went backpacking and camping at Lake Sommerville with Calvin's boy scout troop. They had a wonderful time. They even went to the Bush Museum in College Station. Calvin loved it and wants to return as a family. Lydia and I ended up going to the SHSU football game at the last minute with my friend Kathy and her family. Lydia and Kathy's daughter, Allison, as such close friends. They had so much fun cheering and coloring pictures for people. They may have even watched some of the game! The cutest thing was their cheerleading costumes they both wore - unplanned! 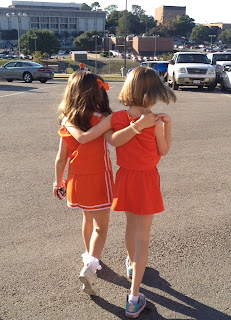 On Sunday my brother, Mike, came to visit for the week. The kids got to spend time with him while we had our small group Sunday night and Craig got to play golf with him and my dad on Monday. I was able to go around with him Tuesday as he passed out his resume to various golf courses in the area. Tonight we are taking him to Red Robin. He loves a good burger and fries!!


Monday, Lydia got her Daisy pin for girl scouts. She had a little part in the ceremony. It was really cute. 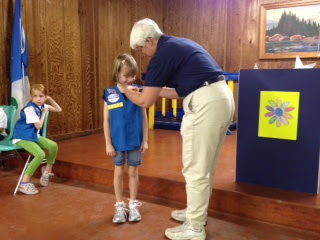 Saturday, Craig is doing a half marathon and I am doing my first 5k. Craig's parents are coming up to help watch the kids. Then on Sunday Curtis and Tracie and their family are coming up because

LYDIA IS GETTING BAPTIZED!!

Lydia has been drawing pictures of getting baptized and drawing the family members that will be attending. Very cute! She worked through a book called "Now that I'm a Christian." It is a very special time and both sets of grandparents will be there too!

So these two weeks have been very eventful and wonderful!!
Posted by The Henderson's No comments: Links to this post

I'm writing this as I wait to take Calvin to piano. Calvin is inside playing legos and Lydia is running around in the backyard. It is so nice outside right now! Calvin loves it! He just started at the end of August and is enjoying new songs and playing duets with his Mimi (my mom). He is also busier and more motivated this year in Boy Scouts. He advanced to a new rank (Tenderfoot) and is working on another merit badge. Calvin and Craig have a 10 mile hike and campout this weekend at Hunstville State Park. Calvin isn't actually excited since he is still holding onto a cough, but I think with Craig going it will encourage him.

While they are gone, Lydia and I will make her halloween costume. She is going to be a paperdoll! Very cute idea from Family Fun! I'm not sure what else we will do - maybe work on her bike riding skills, as they need some work!

Another big thing going on now is the planning for our next vacation - Disney World! Wow, I never knew planning could be this detailed! But thanks to some websites, friends, family, and apps I think I have a good idea of how it all works. I will keep you posted on that as it progresses!

Before I close - I just got word that my brother passed his playing ability test (PAT) to restart his career as a Golf Professional. He was an Assistant Golf Professional at one time, but switched careers. He is thinking of going back to that and this was his first step towards it. So I had to send a praise about that!

Well - time to go take Calvin to piano! See you later!
Posted by The Henderson's No comments: Links to this post

Well it has been 3 years since we updated this blog and a lot has happened!
1. Susan graduated from SHSU with a MS in Agriculture
2. Craig is now tenured and is an Associate Professor
3. We moved to a new house in Elkins Lake in 2010
4. Susan's parents moved to Huntsville, TX
5. The kids are now 11 and 7 and both attend Alpha Omega Academy
6. Craig is training for the Houston Marathon.

Our life is busy but is fulfilling. We still attend Elkins Lake Baptist Church and enjoy our family and friends. I will try to keep the updates coming, with recents photos.

That is all for today - I need to actually go get something done!!
Posted by The Henderson's No comments: Links to this post

So I am busy again!

Well, it is back to our busy life again - no posts, no photos! We just went through a hurricane, but with no major damage at our house. Our kids actually liked not having power for most of the week! God was good - he sent a cool front right after the storm. Calvin is busy with 3rd grade and is learning Latin. Lydia loves her little school on MWF. I will try to keep you posted on our life - but as you know my track record isn't too great. Until later - Susan
Posted by The Henderson's No comments: Links to this post

The kids are already enjoying summer. Calvin got a slip-n-slide for his birthday and they got to play in the water at our church's splash day. For Calvin's 8th Birthday he had a food fight with his friends. We got a chance to try and hit him with whip cream. They also got to have a pudding flicking contest to see if they could flick the chocolate pudding in each other's mouths. Last, the kids had an all out food fight. Calvin said it was great except the macaroni was hard! More pictures of the food fight! The Henderson's
Huntsville, Texas
We really enjoy Huntsville. It is a great place to raise our family. We go to a wonderful church and have such a warm church family. We try to raise our children in a Christ-centered home, but it isn't always that easy. Actually is never easy. Craig is Associate Professor at SHSU and I recently finished my graduate degree in Agriculture at SHSU. Our kids, Calvin (11) and Lydia (7) attend Alpha Omega Academy. We attend Elkins Lake Baptist Church. Craig has taken up running and is training for a marathon in January. Susan enjoys working out and running with friends, as well as playing Bunco monthly! We all are enjoying Susan's parents living in Huntsville.

"Trust in the Lord with all your heart and lean not on your own understanding; in all your ways acknowledge Him, and He will make your paths straight." Proverbs 3:5-6

My Favorite Blogs and Sites